Ready for the pitch, c 1920s snapshot (click to enlarge)

Jack Clements played from 1884-1900, and is regarded as being the last left-hander to catch regularly, as well as the first to wear a chest protector. I hope he also — at least eventually — wore a glove. According to this excellent overview of the history of the baseball mitt, the first confirmed use of a glove was in 1875, and by the 1890s wearing one was the norm.

When Clements passed away in 1941, his obituary in the New York Times read in its entirety: “NORRISTOWN, PA., May 24 (AP) — Jack Clements, former left-handed catcher who played with the Phillies, St. Louis Nationals and Cleveland Spiders in the Eighteen Nineties, died yesterday after an illness of six weeks. His age was 76.”

Too Big a Bat 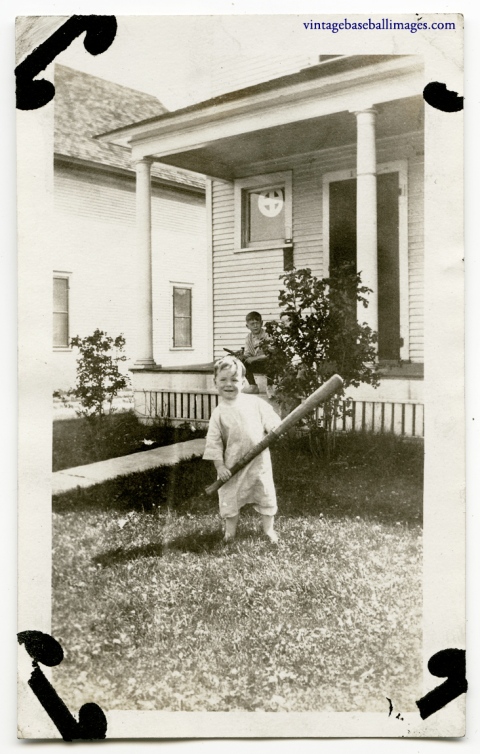 This boy’s “grip” is of course not really a grip, but players of the era did sometimes employ — as it would appear George Pinkney did, from the previous post’s photos — a wide grip for better bat control. Ty Cobb famously claimed he could hit more home runs if he so chose, and he appears to have abandoned his classic grip at times to generate more power. From a piece on baseball bats at sabr.org:

“In 1920 and 1927, Babe Ruth hit more home runs than every other team in the American League. On May 5, 1925, however, Ty Cobb put up power numbers that even the great Ruth couldn’t muster. Frustrated with the publicity Ruth’s slugging had garnered, Cobb commented to a reporter that hitting home runs was not as hard as it looked. He declared that he too would start trying to swing for the fences. With a new mindset and a hands-together grip, Cobb went 6-for-6 that day, with two singles, a double, and three home runs, giving him sixteen total bases—still an American League record (shared with several others) for a nine-inning game. The next day, Cobb hit two more home runs, totaling five in two days—still a major-league record. Satisfied he had proved his point, Cobb returned to his familiar grip and style: trying to get base hits instead of hit home runs.” 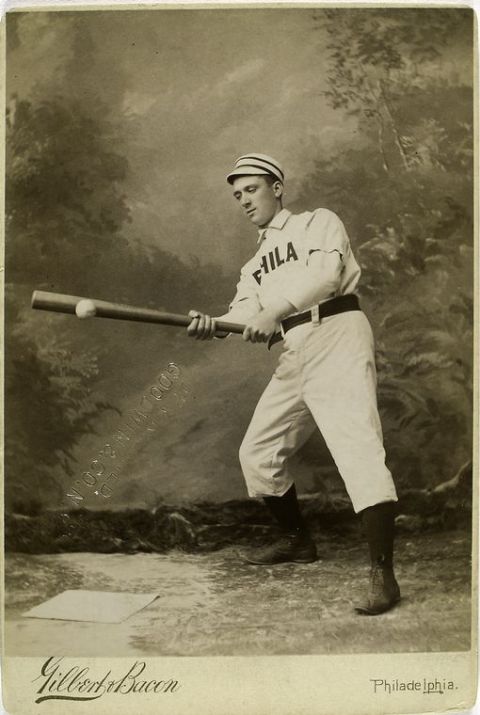 George Pinkney played major league baseball from 1884 to 1893, for teams such as the Cleveland Blues, Brooklyn Grays/Bridegrooms/Trolley Dodgers and the Louisville Colonels. He is the player whose record for most consecutive innings played (5,152, from 1885-1890) was broken by Cal Ripkin, Jr. in 1985. (Note that this was a different statistic than the consecutive-games record Ripkin set when he bested Lou Gehrig’s streak of 2,130 in 1995.) Interestingly, I have seen Pinkney listed as both a left- and right-handed hitter in different places (but not a switch hitter) — perhaps explaining (or explained by?) the photos from each side of the plate?

C.M. Gilbert and William Bacon were well-known photographers in Philadelphia beginning in the 1870s; their studio was located at 830 Arch Street, with a second (from 1886) at 1030 Chestnut Street.

Frank Chance of the Chicago ‘Nationals’ (Library of Congress)

Frank Chance was, of course, the first baseman in the famous Chicago Cubs’ double-play trio of Tinkers to Evers to Chance. He was also the team’s manager from 1905 to 1912, and in fact his winning percentage of .667 is still a franchise record.

This circa 1910 photo — part of a series of portraits used for a set of baseball cards issued by the American Tobacco company in 1911 — was done by New York freelance photographer Paul Thompson. According to a 2009 article by Harry Katz on smithsonianmag.com, not much is known of Thompson: “Even such basic biographical information as the dates of his birth and death is hard to establish. But some two dozen of his player portraits survive in the Library of Congress, bringing to life the subjects’ determination, their enduring passion for a physical game and the ravages of a lifestyle that predated the luxury travel, sophisticated equipment and personal trainers of today.”

It is a striking image. Thompson had a studio at 10 Spruce Street, but according to Katz, he took the photos “against rough wooden backdrops at New York’s ballparks. With a shallow depth of field and an unsentimental lens, he brought out in sharp relief the players’ leathery faces and steel-eyed stares, capturing their pride, their toughness and the effects of extended exposure in the field. The rough dignity of his portraits survived the translation into color prints on cardboard.”

You are currently viewing the archives for June, 2013 at Vintage Baseball Images.